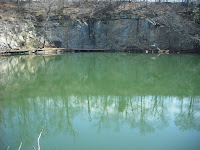 Kids dare each other. It’s what they do. This seems to be especially true in the 1950s and 1960s. Maybe not so much today with other things to do and flashing screens that have driven boredom to the brink of extinction. But there was a time when a double-dog dare carried stare decisis legal precedent and was cited by the honorable Oliver Wendell Holmes in Ralphie v. Flick, or at least that is what the Christmas Story has led me to believe, and as we all know, old movies do not lie. That’s the way life was — halcyon days.

Joe was my father’s younger brother. He was 10-years-old, two years younger than my father, Don. Two years, those two years, but really any two years, are a significant gap in intelligence. It is then not a surprise that Joe the Younger would decide it was a good idea to ride a bicycle off the quarry while sporting a cast on his foot.

Why was he in a cast? Everyone was in a cast back then. Kids were walking infirmaries. They weren’t unhealthy. They drank milk and ate real food. The difference between then and now, is that kids went outdoors and tested the limits of their bodies. Nature often won, but valuable lessons were learned, and my uncle was about to learn another valuable lesson.

It’s unclear how the dare evolved, but all of the pieces were there: Joe, his friends, bikes, a 100-foot cliff. Naturally, some one, some day was going to ride a bike off the quarry. It just happened to be Joe, and at most inconvenient time.

Joe did not hesitate. Kids fear the wrong things. The dark is scary to children, but not launching correctly and crashing into the rocks below instead of the water, well that never crossed his mind. Free of negative thoughts, Joe executed the launch perfectly and sailed through the air and splashed down into the water below. The gang roared and a celebration ensued.

As the high fives and cheers slowly died down. Something important did not happen. The bike sunk to the bottom, as predicted by Jerry Fox — somewhat of an intelligent kid that understood the composition of the frame. However, also sinking to the bottom was Joe.

Several moments passed. The kids were silent and they were all looking at Don. He could feel the eyeballs on him. He sighed.

“Fuck,” he said as he took off his shirt and ran towards the cliff. His dive and minimum splash was at least a 9 out of 10. The kind of technique that would impress the Russian Judges, but not Jerry Fox, he was somewhat of a diving expert, too. The kids did spend nearly all day, every day at the quarry during the summer because they couldn’t afford to go to the public pool. Fox gave Don an 8 out of 10 because he knew Don was a mediocre diver and swimmer, but under duress, Don rose above his baseline mean of 5.7 and delivered an exceptional dive. It wasn’t good enough for Gold, but Don could safely expect a podium position. Fox also thought that if Joe wasn’t already dead, that a well executed dive might save Joe’s life. A bad dive, and you might as well call the coroner. Thus, an 8 out of 10.

Don submerged and torpedoed toward the quarry floor. There was Joe with a panicked look on his face, stuck on the bottom.

I forgot an important part. Before Joe rode off the quarry with a cast on his foot. Don reminded him that he had a cast on his foot, and that their parents would kill them both if they damaged the cast. They could not afford to go back to the doctor to get another cast, and they could not afford the beating that would follow a follow-up visit to the doctor. The cast must be protected, so Don suggested a trash bag.

A couple kids ran back to town to snag a trash bag from their mom’s pantry. During the half-hour it took for the trash bag procurement to take place, no one thought about the possible drawbacks of wrapping a cast in a trash bag. Yes, it would provide a waterproof seal, but if said seal were broken, the trash bag would fill with water and become an anchor. That’s exactly what happened. The reason why Don perfectly executed a platform dive was because he was not thinking about it. He was thinking, I just killed my brother and my dad is going to kill me.

Joe’s face didn’t say, “you killed me, Don.” It was more like, “I am going to die here on the bottom of this quarry or when we get home.” Don’s face said “Fuck. Fuck. Fuck. Fuck.” as bubbles spilled out of his tightly sealed lips.

At first, Don threw his arms around Joe and kicked his legs, but they were going nowhere. Time was vital, so Don quickly abandoned that strategy and proceeded to tear at the trash bag to remove the anchor weighing Joe down.

Joe shook his head no, as to say, “Don't take the bag off, the cast will get wet and then we’re in for it.” Don incredulously scrunched his face which roughly translated to, “It’s already soaked you idiot. And while our funeral will be better attended if we die on the bottom of the quarry than if we’re switched to death by dad, but drowning is supposedly a more painful death than switching.”

Don could not hold back his anger and underwater he shouted, “What was I thinking?” and there went Don’s final breaths, angry bubbles floating towards the top, somewhere they wished they were.

Like everything else during the good times, trash bags were sturdy unlike today. They were made to last and not explode on your kitchen floor. It took about everything Don had to rip it apart. He thought a knife would be nice right now, I am sure someone had a knife. Instead of ripping off my shirt and jumping off the cliff like a maniac, I should have probably asked for a knife first, then I could have ripped off my shirt and dove into the Quarry. I could have even put the knife sideways in between my teeth like Errol Flynn in Captain Blood.

To be continued tomorrow in chapter 3….