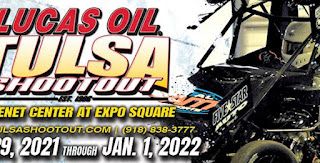 Next year I am going to Tulsa. Either for the Shootout or the Chili Bowl. I’ve been saying it for years. What the hell is in Tulsa? Dirt racing. Sprint car dirt racing — winged or non-winged. What? exactly!

It’s quarter-mile indoor dirt racing. It sounds absolutely mad, and it is. In this world, there aren’t many surprises left. Very few things have not been ruined in America, but here lies a gem in the middle of the country. Here lies a gem you know nothing about.

It’s late in the evening, after a day's worth of heat races. The stands are generally empty (it’s Thursday, basically a practice day), but in the top row of the stands, there sits the day’s best drivers that smoked their heats earlier in the day. They sit on the aluminum bleachers in hoodies, drinking camo-can Busch lights, smiling, loving every second, every breath of life, every—dirty—breath.

Remember how exciting football was when you were a kid, or baseball, basketball, hockey even? You didn’t know much. It was all new. Everything was something different. You didn’t have enough knowledge to be cynical. Boredom was impossible with constant novel experiences. We seek this in everything, but after a certain age, it’s impossible to get through sport. Except for one last left unexplored avenue — dirt racing.

I don’t know what the hell I’m watching. I have a racing simulator (iRacing) and I’ve run quite a few dirt races. It’s incredibly fun. It’s not fun to lose, and I lose every time, but that reinforces the idea that this is a skilled sport. It is fun to whip a vehicle with an insane amount of horsepower in a tiny little frame around on dirt — sliding, bouncing, hopping, wrecking — it’s fun. Going fast is fun. Going fast out of control is more fun. Going fast, out of control, switching groves, side by side with the best dirt racers in the world who are also going fast, out of control and switching lanes every lap. That’s what is happening right now in Tulsa.

Who needs slot machines? Who needs Facebook or Twitter? There are 100 races in a day. Thousands of dirty, slippery laps. I’m going to Tulsa next year.